The clean, cold, cascading water of the White Salmon River, flowing from Mount Adams glaciers and pristine springs to the Columbia River, supports and attracts a tremendous diversity of flora and fauna. It is the pulsing heart of our local ecosystems. FWSR’s “Ribbon of Life” blog series highlights eyewitness accounts and images of the many delightful species who rely upon the remarkable qualities of the White Salmon River.

Above the rushing sound of foaming whitewater, high-pitched whistles and trills rise from the White Salmon River into the cool morning air. Suddenly, one of the many small grey lava rocks protruding above the water’s surface in midstream unexpectedly moves and mysteriously disappears beneath the surface of the icy water. After several moments, an American Dipper (also called “water ouzel”) pops up in a small pool at the water’s edge and hops onto the dry surface of a tall rock. It takes a bow, followed by another, and then another, dipping up and down repeatedly before settling down to preen its dark bluish-grey plumage. This amazing swimming songbird forages on aquatic insects, larvae, small fish, tadpoles, crayfish, and fish eggs by diving, swimming, and wading through the swift water, utterly undaunted by frigid strong currents. The Dipper lowers a clear membrane over its eyes to see underwater, seals water out of its nostrils with scales, and navigates using eddies and backflows to its advantage. There it sits, on a rock that formed tens to hundreds of thousands of years ago from cooling magma flows on Mount Adams, warming up and grooming its “dry suit” of feathers into perfect well-oiled condition, as needed to insulate the Dipper from the freezing waters. After ten minutes, it flies low over the water to another rock downstream, and then dives back into the river to continue its hunt for food. The American Dipper, while declining across the West from poor land management practices that have caused habitat degradation and loss, pollution, and riverbank erosion, is still thriving in the White Salmon River! A joy to see!

Sun sparkles on the tumbling river, and flashes of light and foam bounce energetically downstream between grey lava boulders on a warm August day. Near the river’s edge below, bobbing white spots appear, meandering upstream against the current. Moments later, downy forms of ducks, colored grey like the rocks and sporting white spots on their heads, come into focus– it’s a female Harlequin Duck followed by four of her babies! Harlequin Ducks spend most of their lives amid turbulent surf along rocky coasts at high northern latitudes, but in springtime they migrate inland to nest on the shores of clean, cold rushing streams like the White Salmon River. 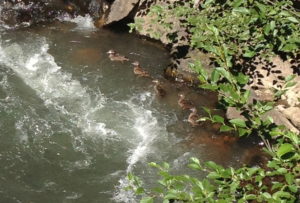 A female will lead her mate back to the same natal stream where the female was born. After mating in April-May, the highly colorful male, whose garish plumage inspires the name “Harlequin,” returns to the pounding seashore, while the female stays to hatch and raise her ducklings. These four ducklings seen making their way upstream today are nearly as big as their Mom now, and probably hatched in June. Foraging as they go, the ducks repeatedly dive below the surface, pop up like corks, and then dive again to feed. They are seeking small fish, invertebrates, fish eggs, and insects. 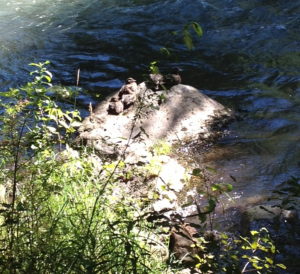 Mom climbs out onto a large boulder, and soon all the young ones follow. They preen the water from their feathers with their bills, snuggle together in a soft heap, tuck their heads under their wings, and take a nice nap while warming up on the sun-heated rock. After twenty minutes of rest, Mom raises her head, stands, shakes her feathers into place so that her insulating plumage will keep her dry and warm in the glacial river, and hops back into the water to continue foraging upstream. One by one, the ducklings follow. 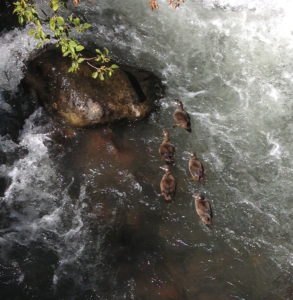 Later in August, a group of four ducks flies low over the river, heading downstream. These are the same ducklings who have now fledged and are becoming more independent. In the fall they will accompany their mom back to the Columbia River, and onward to the seacoast for the winter. We will hope to see Mom back on the White Salmon River with a new brood of ducklings next year. Her daughters from the summer of 2020 will be mature enough to return here and have broods of their own by the summer of 2022. As long as the White Salmon River remains the way it is today—cold, fast-flowing, and unpolluted by toxins and silt— these amazingly hardy ducks will return and thrive, and we will rejoice to see them! 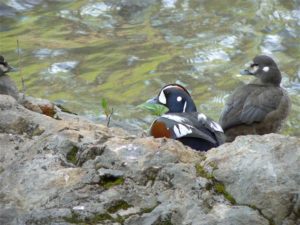 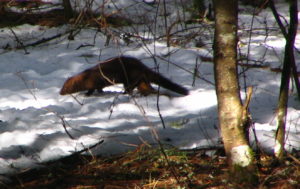 What’s that sound? Several staccato shrieks pierce through the rushing roar of the White Salmon River. Is it a bird? No! A slim, brown, four-footed mammal abruptly springs from the river onto the top of the tallest boulder in the stream. It’s a mink! The mink faces downstream, stares at the opposite shore, and screams again in alarm. A large black dog pushes through the greenery on the far bank, and then wades into the shallows at the river’s edge, barking frantically all the while at the mink. Instantly, the mink dives back into the torrent. Its small dark head emerges as the river sweeps it downstream, past the dog and danger. The mink knows that the dog cannot follow. Lucky for the dog! Minks are ferocious carnivores, akin to weasels, and though they weigh no more than 3 pounds, they can put up a fierce fight when attacked. They are accomplished swimmers, divers, and climbers who hunt their prey by sight in the water and on land. In the White Salmon River, mink feed on crayfish, fish, amphibians, and invertebrates. In the riparian vegetation fringing the river, they hunt mice, shrews, rats, squirrels, rabbits, frogs, snakes, lizards, skinks, birds and eggs.

Minks are mostly nocturnal, they forage under cover of vegetation, and they rest out-of-sight within burrows and cavities that are underground, inside logs and logjams, and up in trees. For all these reasons, it is not often that we get to see them. This time we have the dog to thank for our unexpected sighting.

Even when we don’t see the mink, we find its tracks in the wet silt along the riverbank, and visualize what it is doing as it makes its way along the shore. 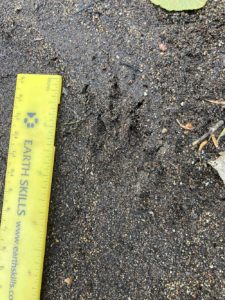 In winter, when streamside vegetation is sparse and the dark fur of the mink stands out against the white snow on the ground, we have a better chance to spot them in the daytime, though they are less active at this cold time of year.

Wild mink are on the decline in the U.S., so we are happy to see them thriving along the White Salmon River! 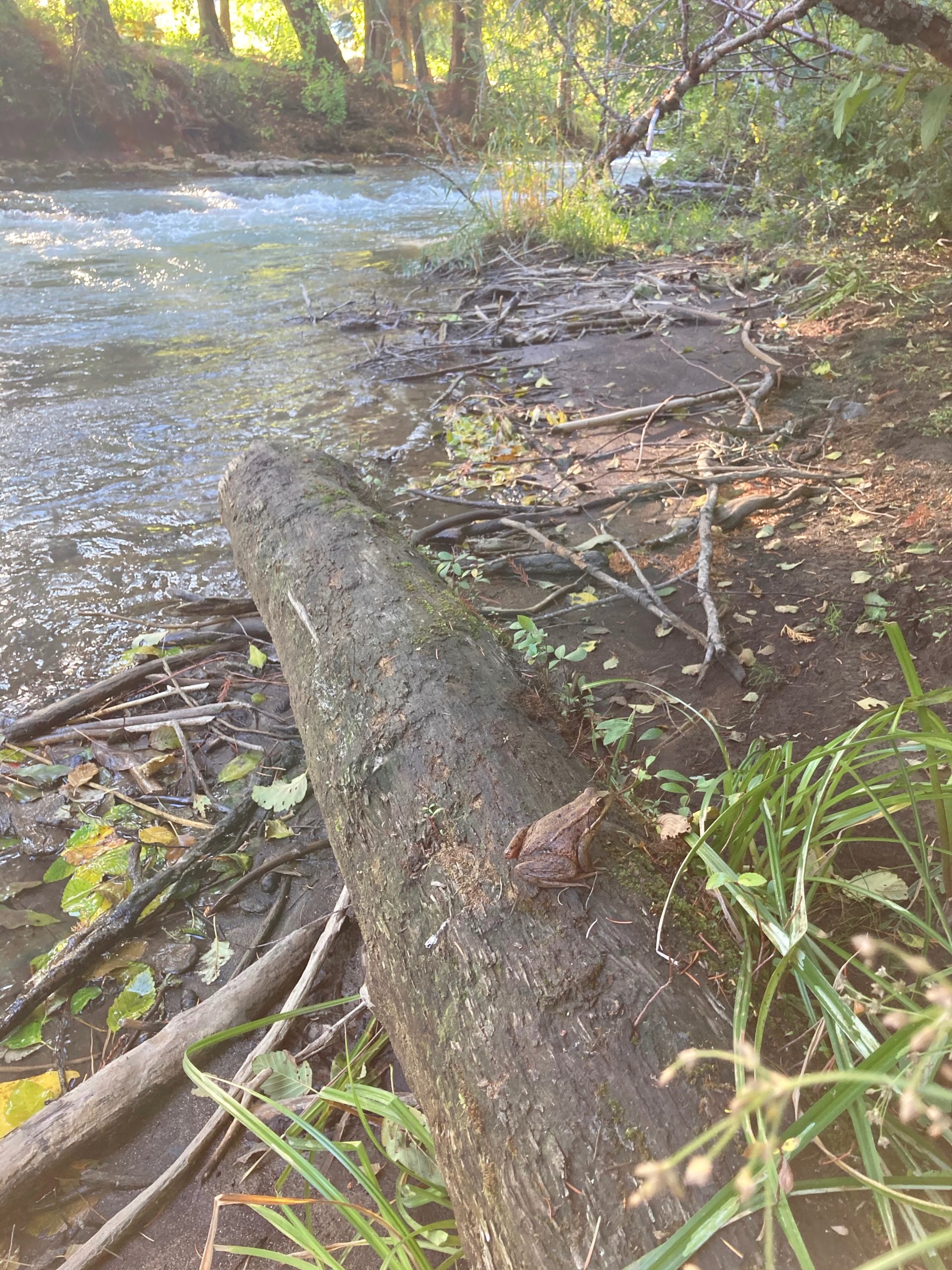 In the late afternoon on an unseasonably warm day in early October, we are looking for animal tracks at the edge of the White Salmon River. Little rain has fallen since June this year, and the river’s water level is now unusually low. The drop in water level has exposed beaches of wet silt along the river’s fringes, and here we find footprints of animals. Dodging low-hanging branches as we follow the trail of tracks downstream, we barely notice what looks like a mossy, fist-sized stone on the beach ahead of us. Intent on the tracks, we are about to step over the stone when we realize just in time that it has long-toed feet and large eyes—yikes, this is a frog! And one unlike any that we’ve ever seen before. 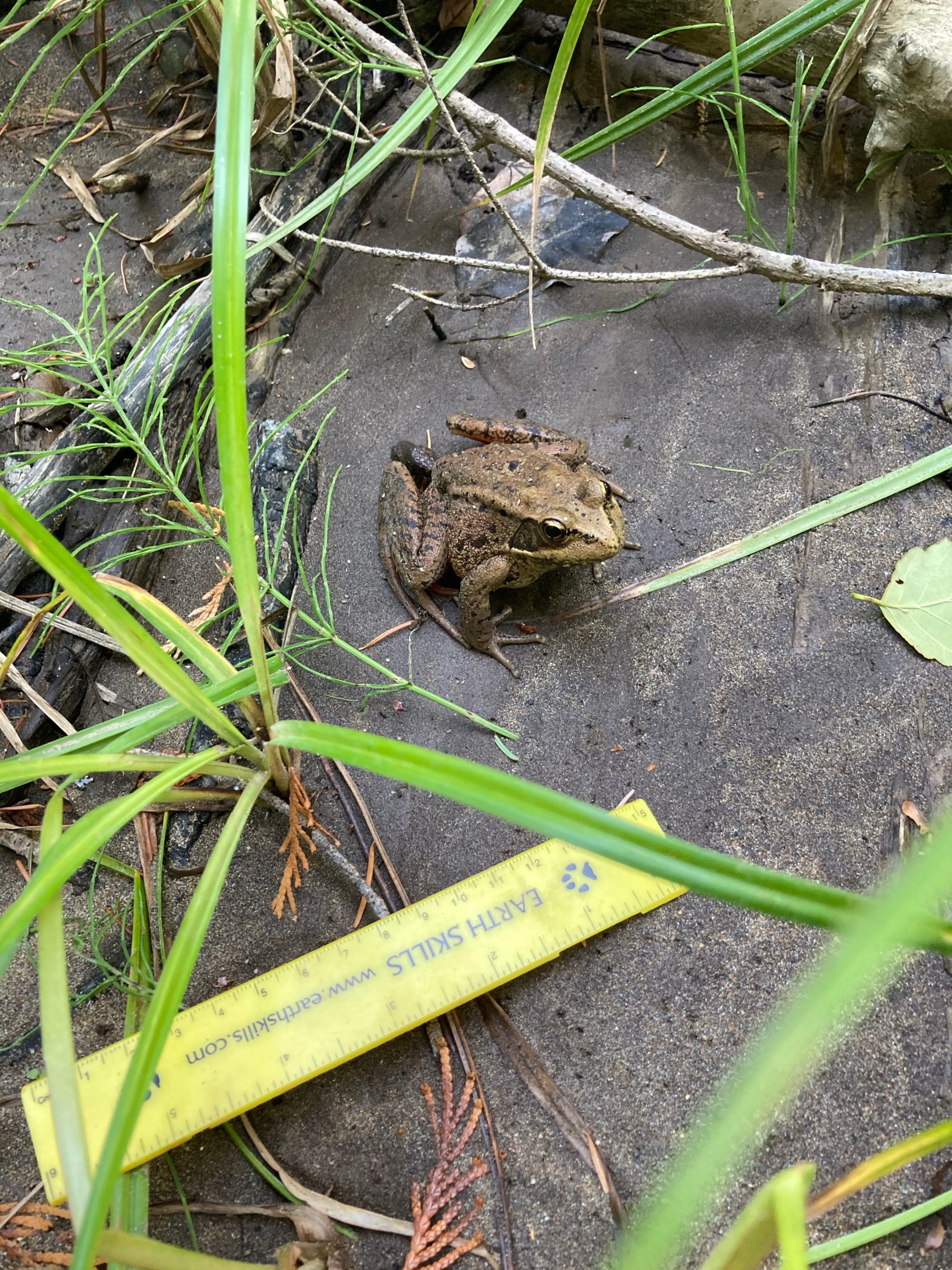 Fascinated, we kneel to get a closer look. It is a preciously beautiful and nakedly vulnerable creature, with pale tan-to-olive brown skin that is mottled by black spots on head and body and subtle black bands on its hind legs. The frog’s gorgeous eyes, golden-ringed orbs with abyssal-black centers, glimmer like a flickering flame in the fading light. 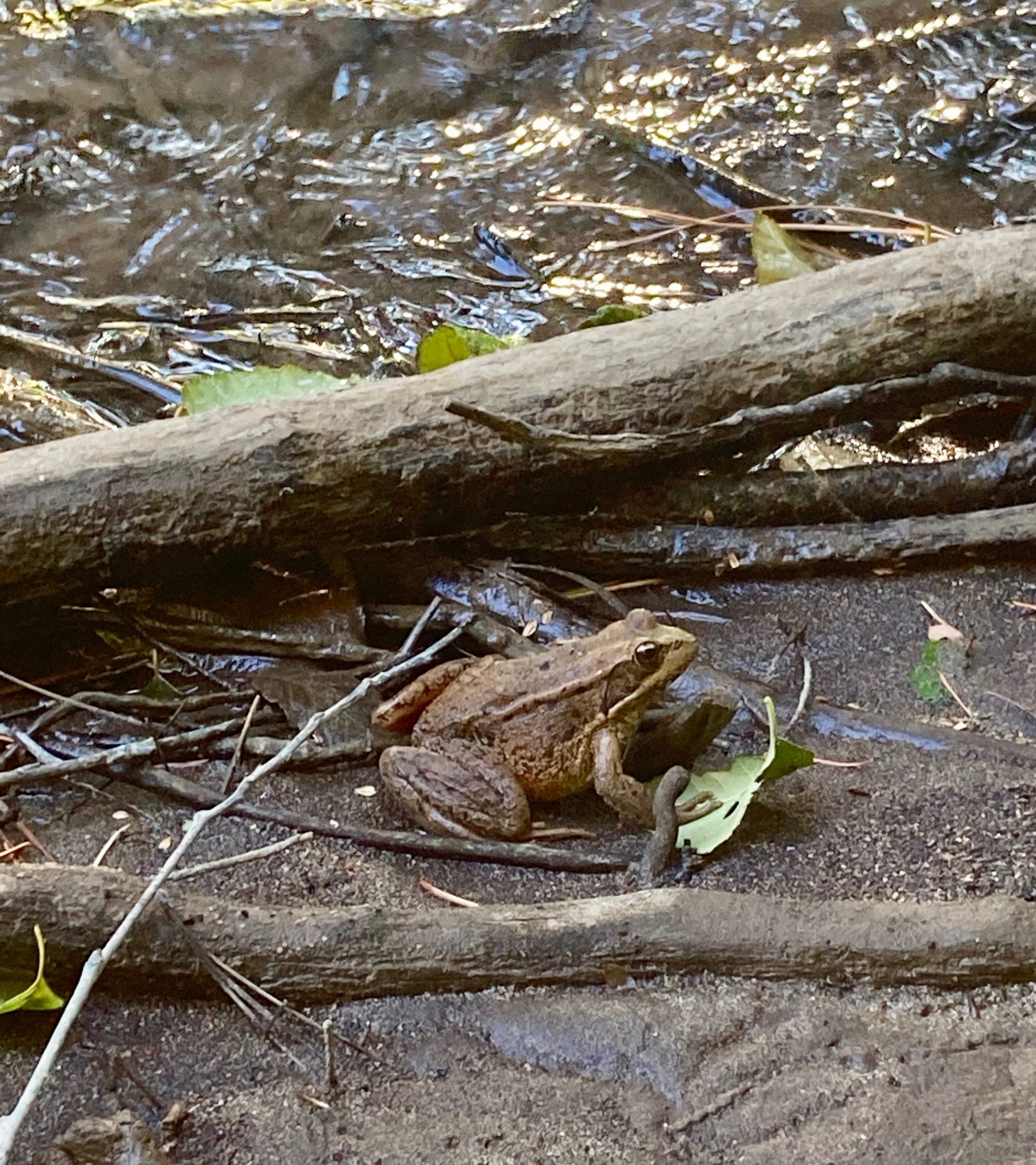 Though we are near, the immobile frog continues to imitate a stone, no doubt hoping to avoid our notice. But when we extend a hand to take a photo, it startles us by launching a giant leap up onto a fallen log.

As we follow, it jumps down to the beach, and then hops twice more until it disappears into the dense vegetation lining the riverbank. We abandon pursuit and feel relief that the frog is now well-hidden from the owls, mink, raccoons, and other frog-eaters who will soon be hunting at sunset.

Who is this unfamiliar frog? Is it a Cascades Frog (Rana cascadea)? Or perhaps a Northern Red-Legged Frog (Rana aurora)? To distinguish between these species, one has to capture the frog and look at the color of its underside, which we did not do. Either way, though, it’s quite remarkable and exciting to find a frog like this one where we found it. Neither R. aurora nor R. cascadea has been found before in this particular area. However, the Cascades Frog is known to be in the White Salmon River watershed at higher elevations, and for this reason R. cascadea seems the most likely candidate.

Cascades Frogs mostly live at subalpine and alpine elevations in WA, OR, and northern CA. These frogs hibernate about 9 months a year, but in spring-summer they emerge and breed in the wet meadows and seasonal lakes and ponds formed by melting snowpack. The eggs are laid in still or slow-moving shallow water and hatch within a week or so. The tadpoles metamorphose into frogs about three weeks later, and grow into breeding adults in 3-5 years. The full lifespan of a Cascades Frog may be more than 10 years.

The survival of Cascades Frogs is being challenged by climate change. Cascades Frog numbers are declining throughout its range, and they are in near-threatened status in the southern Cascades of northern California. Climate warming means less mountain snowpack and hotter, dryer summers. The small snowmelt ponds where these frogs lay eggs often dry up too soon now, killing eggs and tadpoles. Other high elevation water bodies shrink and become too shallow by summer’s end, and then can freeze completely in winter, killing hibernating frogs. If the frogs rely mostly on large lakes that don’t freeze to the bottom, then the trout stocked in these lakes eat many eggs, tadpoles, and juvenile frogs, greatly increasing mortality from predation.

If the frog seen by us today is the Cascades Frog, it is at surprisingly low elevation (about 1900 feet), below where R. cascadea has been found in the past. Is this species extending its range to lower altitudes as it seeks to survive in a changing, warmer world? Is the perennial river a wet refuge at the end of an exceptionally long and dry summer? Did this frog follow water flowing from subalpine to lower elevation? How fortuitous, and wondrous, to find this fellow in the lowlands where we reside. We will keep an eye out for more of its kind, and, if we are so lucky as to find another one, we’ll carefully catch it and examine its belly! The White Salmon River sustains so many marvelous species! We delight in being among them.